Scottish Power’s PEIR report released at Phase 4 consultation provided further information about the damage and disruption proposed cable routes for EA1N & EA2 could have on the Suffolk Coast’s popular coastal walks and public rights of way (PRoW). SASES have illustrated the cable route on the map below in purple and where this will impact on footpaths and PRoW in red. 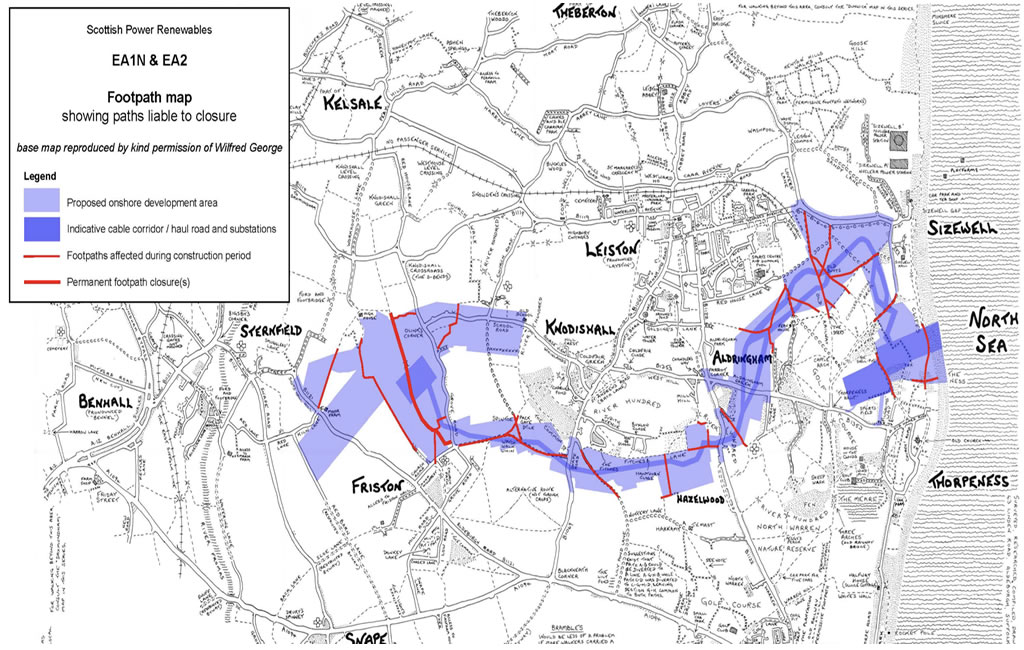 Large sections of the Sandlings walk will effectively be ploughed over by the combined projects 64m wide cable corridor (significantly wider than the M25 motorway). Around 1 mile of Sandlings walk from Friston to Coldfair Green, Knodishall will be ploughed up, closed or diverted, as it lies in the path of Scottish Power’s monstrous ‘cable route’. Further closures, diversions or removal of accessible footpaths, bridleways & tracks are likely all the way along the cable corridor as it passes Leiston, Aldringham, Sizewell & Thorpeness. Whilst SPR have provided some details of the route, they have not provided clear details as to where or how they propose to re-route public rights of way.

The damaging footpath/PRoW proposals come in light of SASES’s recent findings that both projects EA1N & EA2, could and should have been connected via the Bawdsey to Bramford cable route.

SASES has requested that a government ‘Energy Select Committee’ look into the failures of SPR’s Bawdsey to Bramford cable route but this has not happened, suggesting that energy companies can get away with misleading the planning inspectorate (a government appointed body) and key stakeholders.

Did SPR mislead PINS and stakeholders when requesting so called ‘non-material changes’ for the Bawdsey to Bramford cable route?

It is questionable whether these proposals are facing proper scrutiny at the highest level. The clear impact they will have on the Suffolk Coast & Heaths AONB, footpaths, coastal walks and ‘unspoilt’ environment cannot be ignored.

“We are extremely concerned as Scottish Power have showed a complete disregard for tourism and for our small communities living on the Suffolk Coast. They simply do not care about the damage the proposals will have along the Suffolk Coast. Scottish Power Renewables do not care about the AONB, or about my families tourism business, or any other tourism businesses based here. They are focused on getting the go-ahead for these projects and seemingly nothing will stand in their way.”

“…..we have raised concerns with the Suffolk Authorities about these proposals and all the other energy proposals but we feel our tourism business and many local businesses that rely on tourism are being ignored. We are being systematically let down by our MP, Suffolk authorities and the UK government. Energy policy is failing the Suffolk Coast & Heaths AONB and the tourism industry here. Much of the chaos is down to National Grid, they have a huge number of questions to answer, they are supposed to assess suitability of projects, plus projects cumulative impact on a local area – they (National Grid) have never contacted our business or any other local businesses for feedback or views. National Grid’s decision making appears to be dangerous and out of control.